I'll tell ya what though. The process was a bit sketchy. The account they use for paypal transactions is no longer a good email address, and they didn't send out a confirmation that the order had been received either. So when I sent an email to that address and it bounced back I immediately got worried. But later on that day I got the FedEx tracking info, so I knew it was all good, but for a while I was kinda upset.

I was just perusing the Hondata help files and came across the following:

Anyone know anything about this? Is this really only necessary for the 12 model year? And is it actually needed? ELD already looks to be disabled judging from the review of my tune. I'm hesitant to pull pins out of the connector if I don't have to.

did you buy an aftermarket wideband? People who want to run a dedicated wideband gauge need to follow that

Oh! That's that it meant!. Thanks

They use ect 2 for flex fuel when u run the sensor.

Good to know. I was looking at the Sirimoto Flex Fuel kit yesterday. I think I'm gonna start setting $$ aside for a clutch first though. I can tell that's gonna be coming in the next year if not sooner.

Let me ask u this. Are u gonna do a lighter flywheel?

Nope. I was looking at the FX300 kit with the regular FW. Swapping the blower, intake, and DP just to get smogged in 2 years will be enough. I don't wanna have to pull the trans too.

Been looking at the UR Lightweight Pulley. Adding this to the list of future mods. This will be a good one that should be able to remain on even after the return to stock for smog.

Looking at the standard size (Not underdrive). Maybe the Crank and Alternator pulleys.


That one looks WAY better... due to the downhill the real world dyno results are likely in the middle of these two graphs, but still guessing that Rev8 felt much better. No changes needed, see attached. Hope that helps 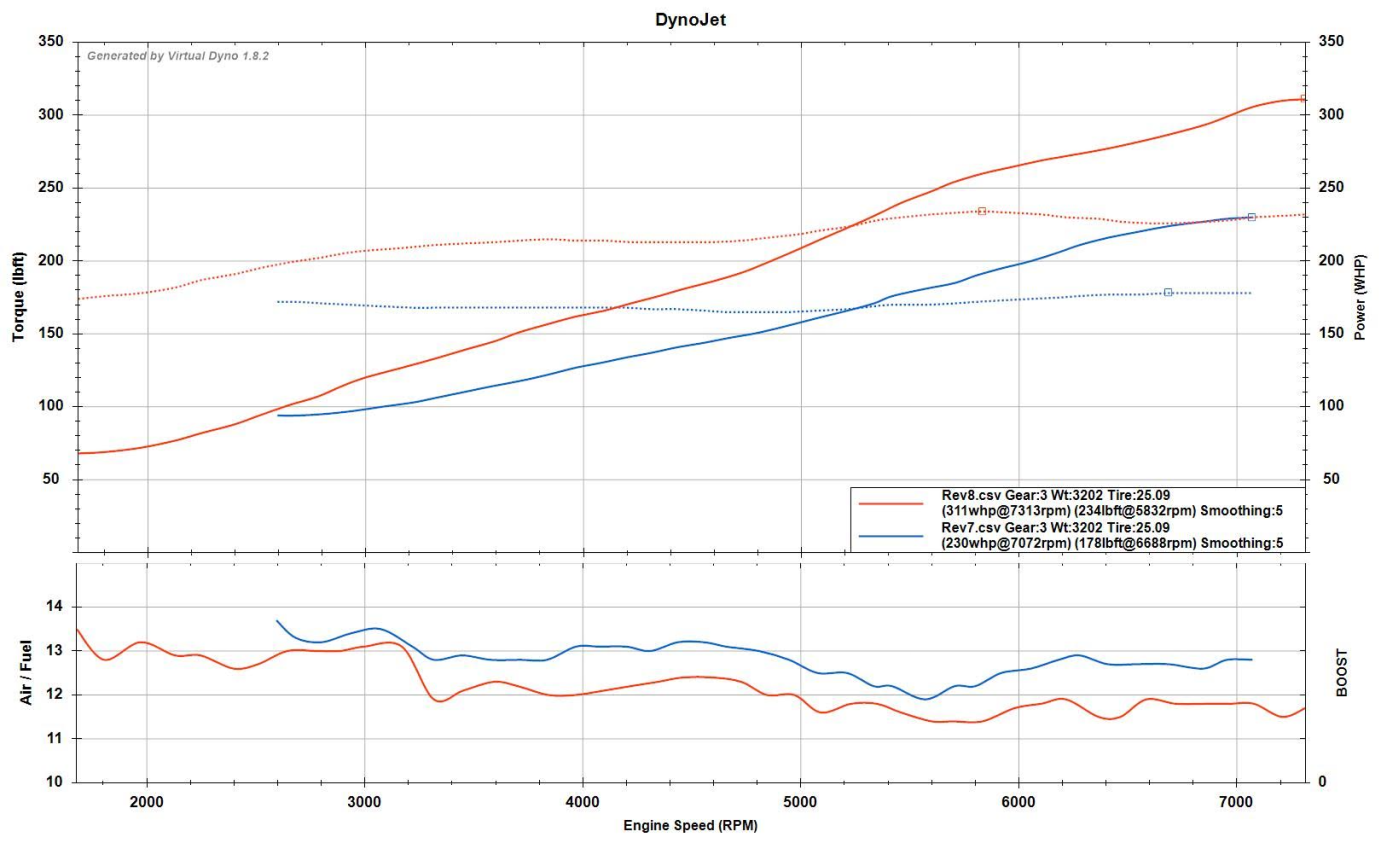 Last pull was on a slight decline. I'm going to find a better spot to do some pulls and I'll load up the data in Virtual Dyno. I wanted to have one that I know was input correctly so when I got to start loading I have a good baseline.

Now get an aftercooler!

Already looking at the MercRacing kit

Probably going to be after the clutch as I'll definitely need more holding power past this point I think. And with 67k on it, I'm sure it's going to be time sooner or later. Luckily we're going into the cool season, so I think I'm in a good position to get the clutch paid for before aftercooling is needed. I'll probably couple the aftercooler with the 2.95 pulley since cooling is really the only thing keeping me from sizing down the pulley immediately.

I still have the ZDX TB and Spacer on hand. Still going back and forth on whether it's worth it to install because of this:

Those differences in current is nothing to sneeze at. 10.4A on a circuit that's only rated for 5A seems to be asking for trouble.

I mentioned my hesitation to use the ZDX to Steve and his response was:

"In short, we had had some issues with it, lots use it, and many don't have issues, some do. Where its idle or error codes, or mal funcitions. Based on our experience over the years with gains in this area, the bulk of the gains (3-5WHP) happen between 60-68mm in size, not much after that... so... I prefer to use an old school overbored TSX TB (K24A2 06-08 / 64mm+4mm), same current, good idle, no codes."

But since I already have the ZDX I may just go with it and know that if I experience odd idle issues or codes it's probably the TB. The real hesitation comes from not knowing where the point of failure would be. The ECU, or the TB IC that controls the circuit. If it's just the TB that goes belly up, whatever. But if it would be the ECU that takes the damage that becomes a far larger concern.

In reality I'm probably over thinking it, but that's just what I do!

For what it’s worth I’ve had the zdx for a long time with no issues. Knock on wood.

And I think the throttle body is the only choke point u have now.

You're definitely right. Especially considering the intake is 3.5in and the exhaust is 3.0in the TB is definitely the choke.

I'd like to hear from someone that actually had an issue. This is one of those odd situations where the anecdotal accounts seems to outweigh the factual evidence. No one really seems to have had an issue, (at least not that I've seen outside of that thread) but I'd just like to hear that even if it DOES fail it would be the IC on the TB, and not the ECU itself.

I was leaning towards IMTs bigger aftercooler.

I have never seen a single post about issues with the ZDX, btw.

And that's what get's me! I've never seen anything other than the Hondata thread and some other anecdotal experiences. The only person that I directly spoke to about the issue still didn't really have a problem. It was more of an annoyance as nothing was broken, he just said that drivability was suffering. That being said, dude is running a MUCH larger blower, larger pump, and larger injectors which would totally lend to the rough idle/drivability issue.

I'm assuming the AC that's in the kit above is this one: